This is also affordable housing

Here is another example of affordable housing in Sebastopol that would not be able to be built today because of our current zoning code. Every city has these buildings. Most were built before there was such a thing as a zoning code and are now considered ‘legal non-conforming properties.’ And many of them are fine examples of Missing Middle Housing, a term coined by Dan Parolek of Opticos Design (BTW, Dan has a great new book out about Missing Middle Housing). 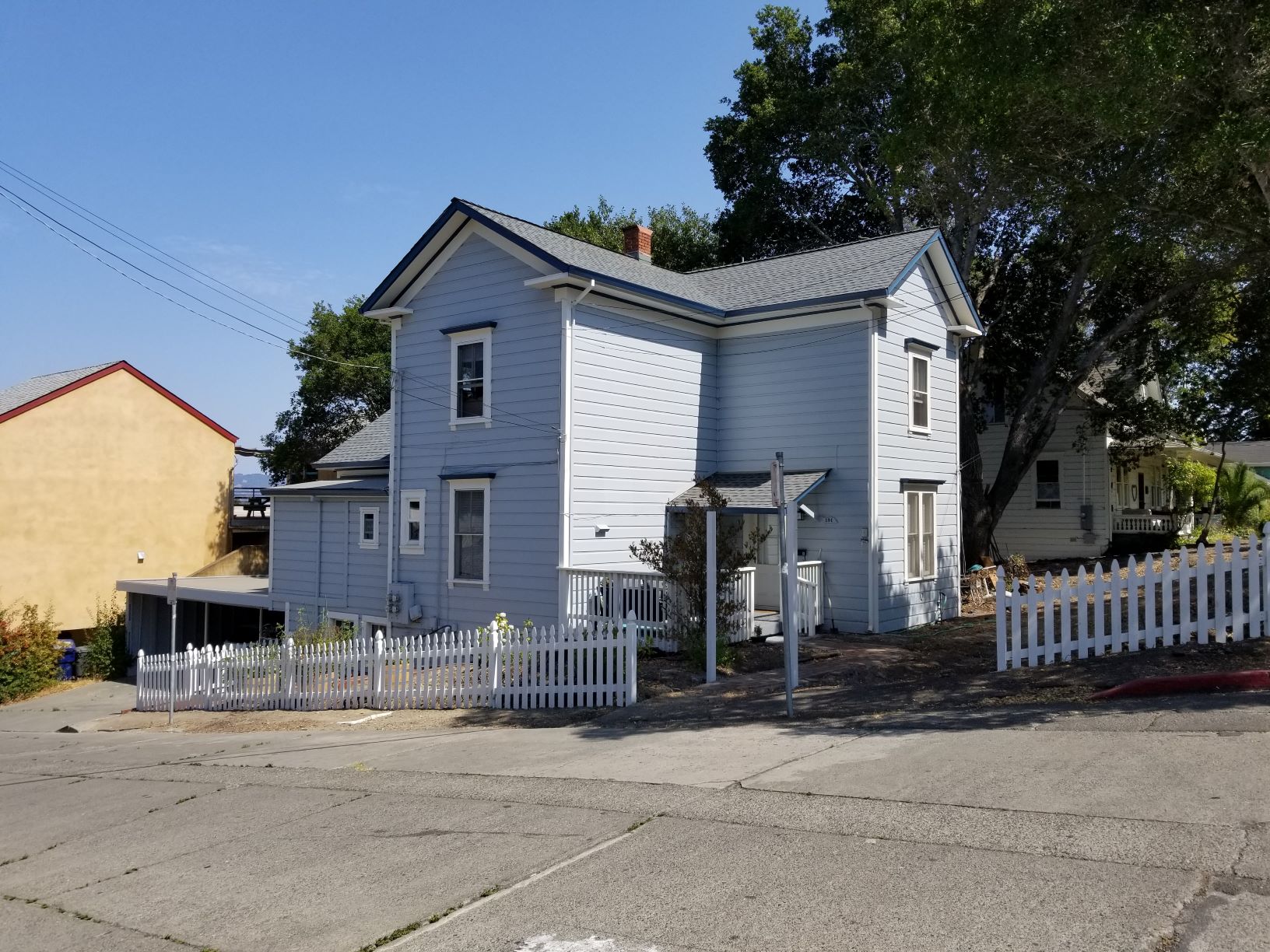 This building is on the corner of North High Street and Wilton. It was likely a single family residence when it was built, but looks like it has been added on to over the years and been converted to 3 units based on the number of meters and mailboxes. I have to admit I have no idea how much these rent for, or how large they are (although Zillow lists it as 3 bedroom/3 bath, so I would guess they are 1 bedroom units), but I imagine they must be relatively affordable.

This property is located one block from Main Street in the Downtown Core zoning district. If this were to be built today, it would require a Use Permit because the Downtown Core zoning district does not allow 100% residential uses by right. They must be part of a mixed-used project. Even though the surrounding properties are mostly residential uses and it would not seem important to require a mix of uses on this property. The property immediately to the left in the photo, which is towards Main Street, is an office building. The building to the south looks to be residential, although it had been used as office space at one time. 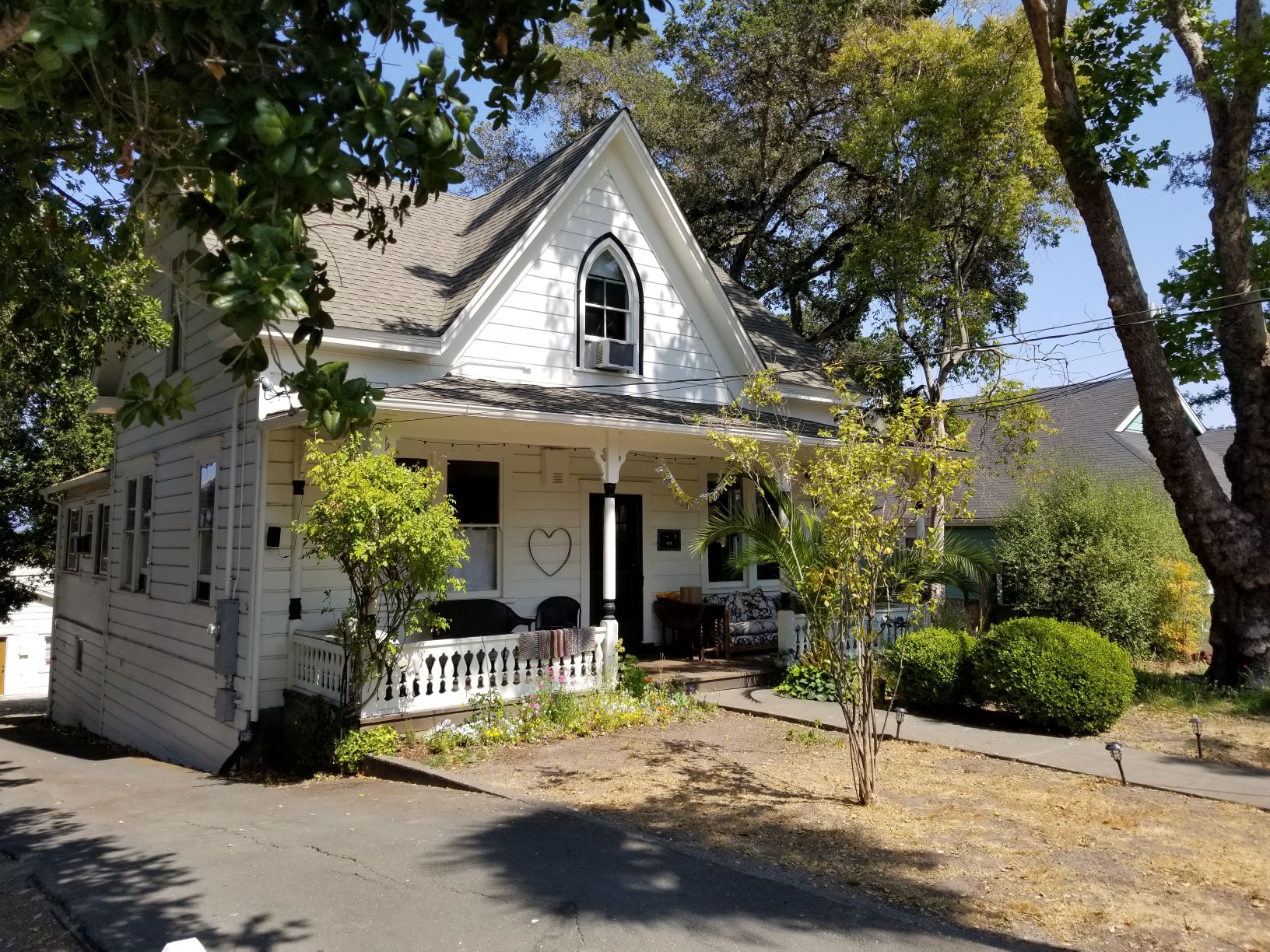 And the building next to that is now the senior center, although I’m sure it also started life as a single-family home. 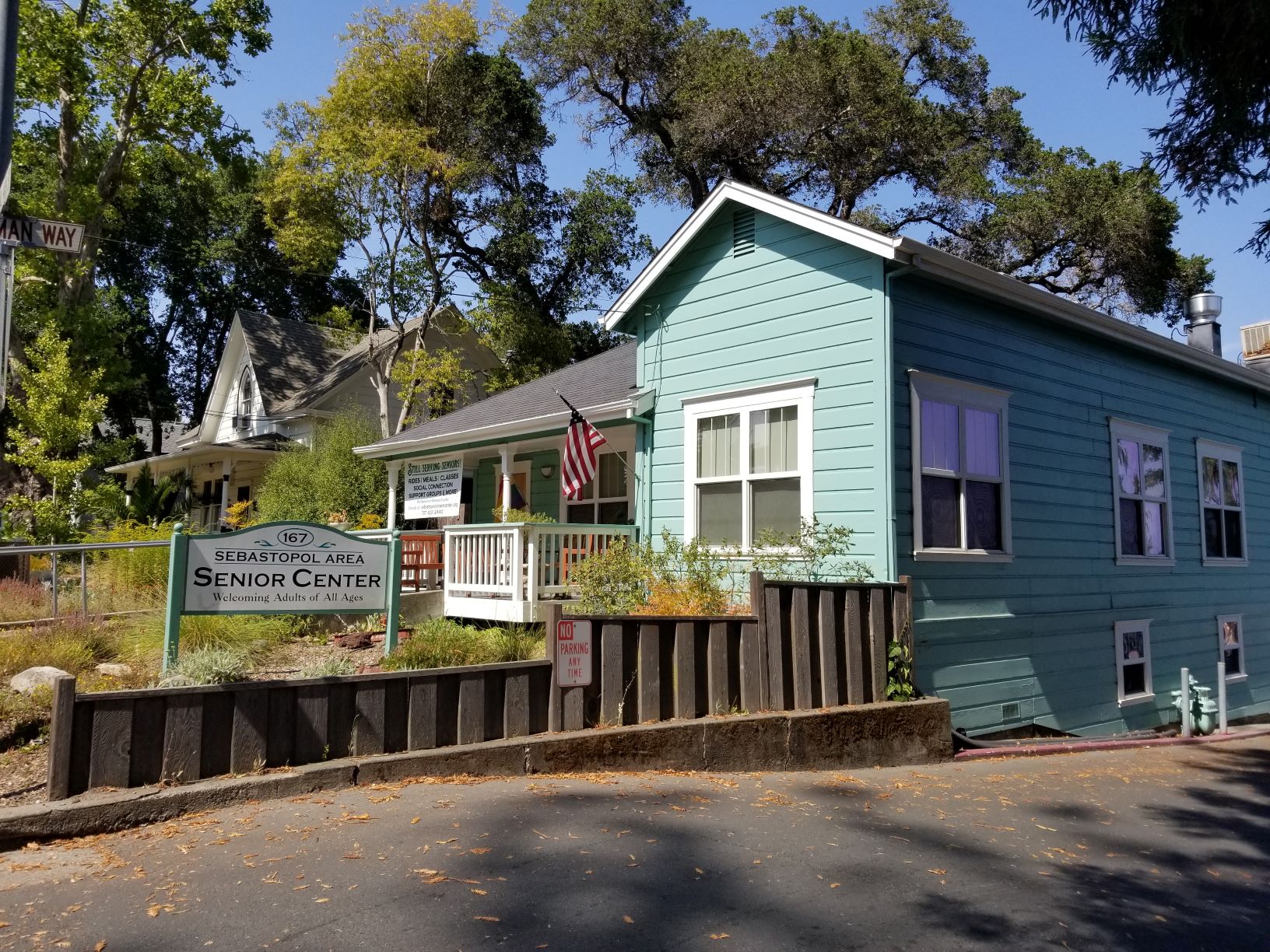 Across the street are single family homes, and a senior care facility in what once was a single-family home. 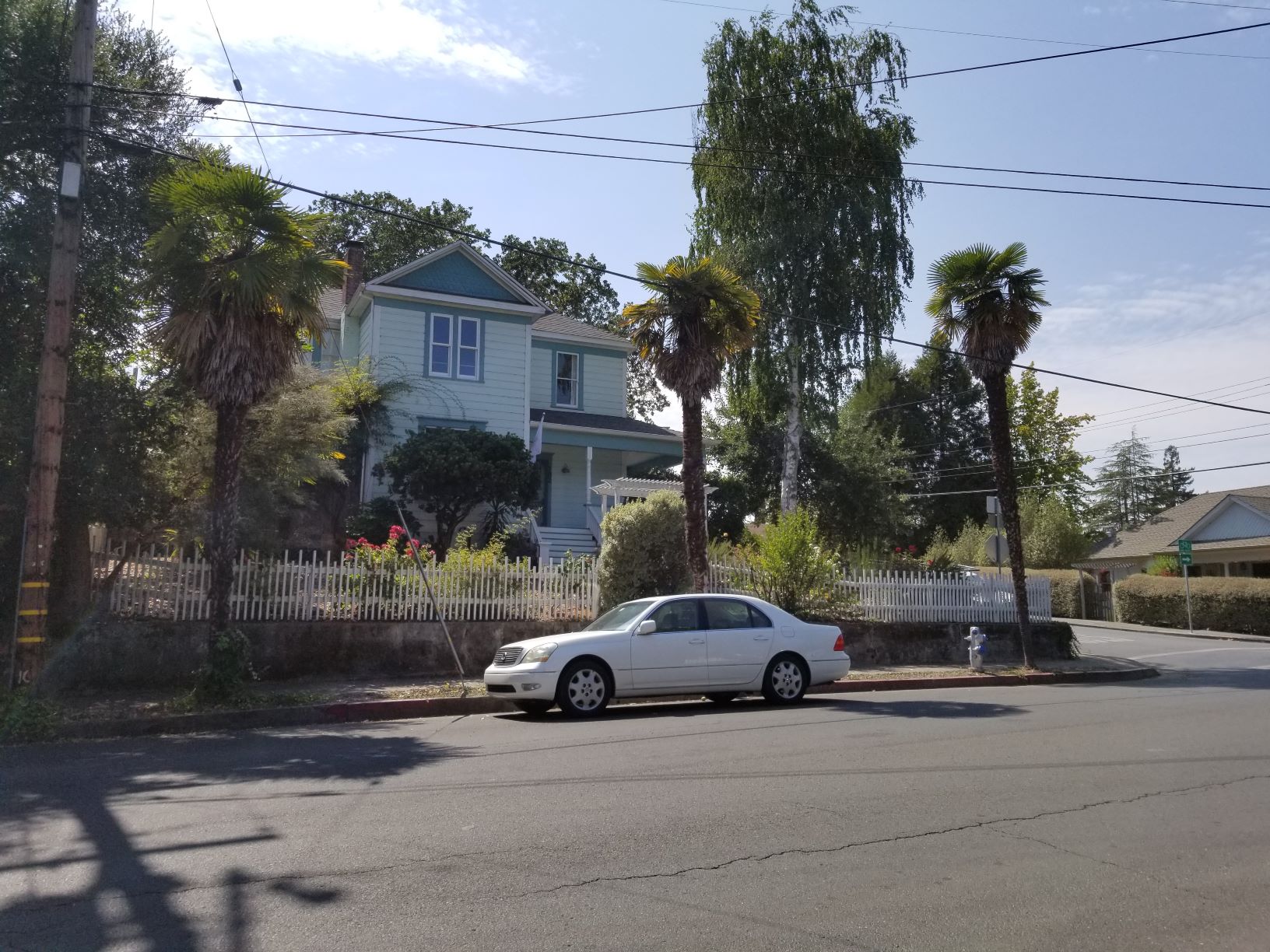 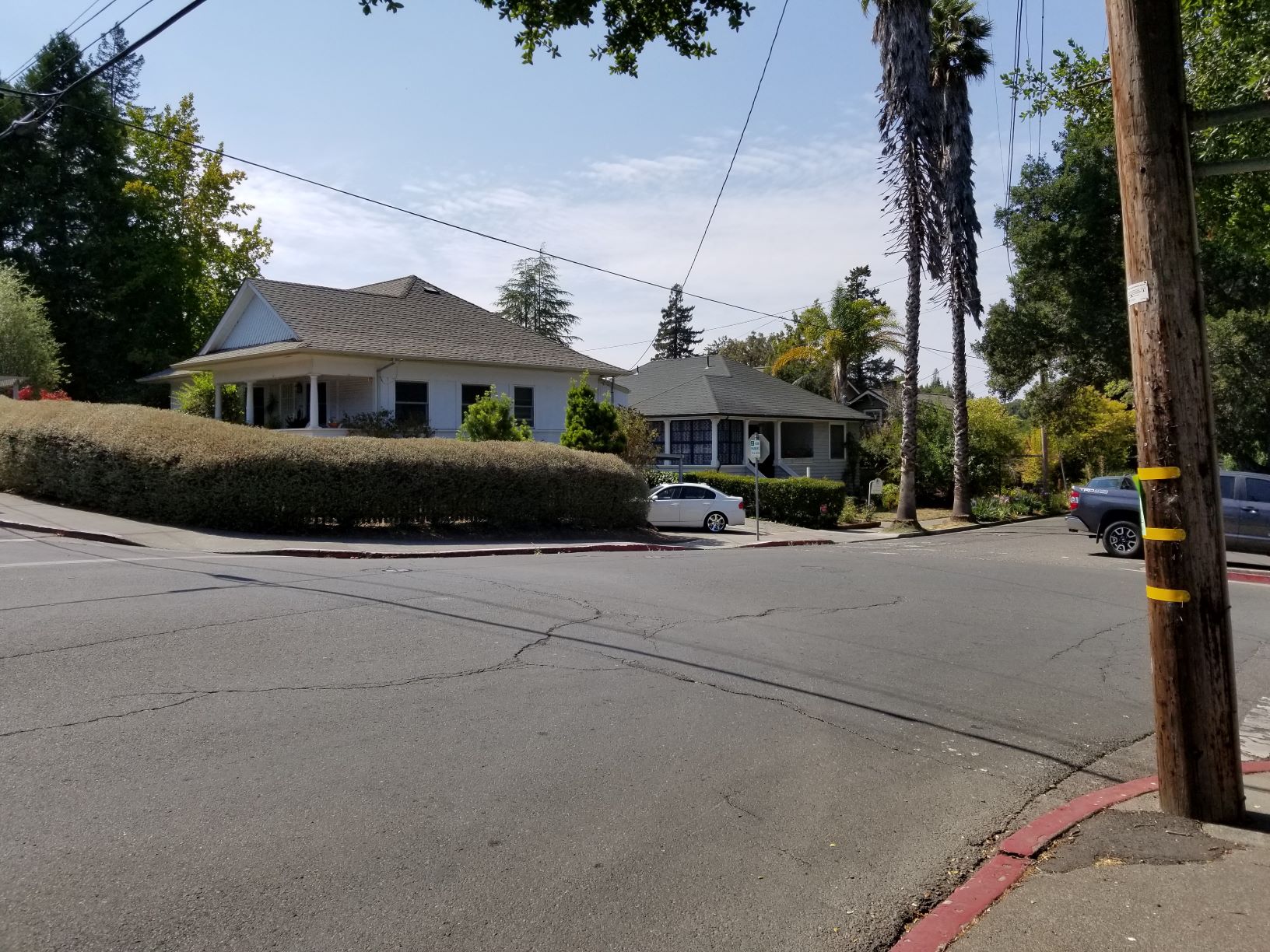 The house second from the corner is a senior residential care home.

So the neighborhood is a mix of residential and commercial properties, but a fully residential property is certainly not out-of-place, and requiring a Use Permit for this is somewhat burdensome to a developer. This mix of uses was once common in our downtowns, but we have largely zoned them out of existence because most modern zoning codes like their uses separated. Or sometimes, as in the case of the zoning on this property, they require you to mix them in ways that don’t seem necessary. 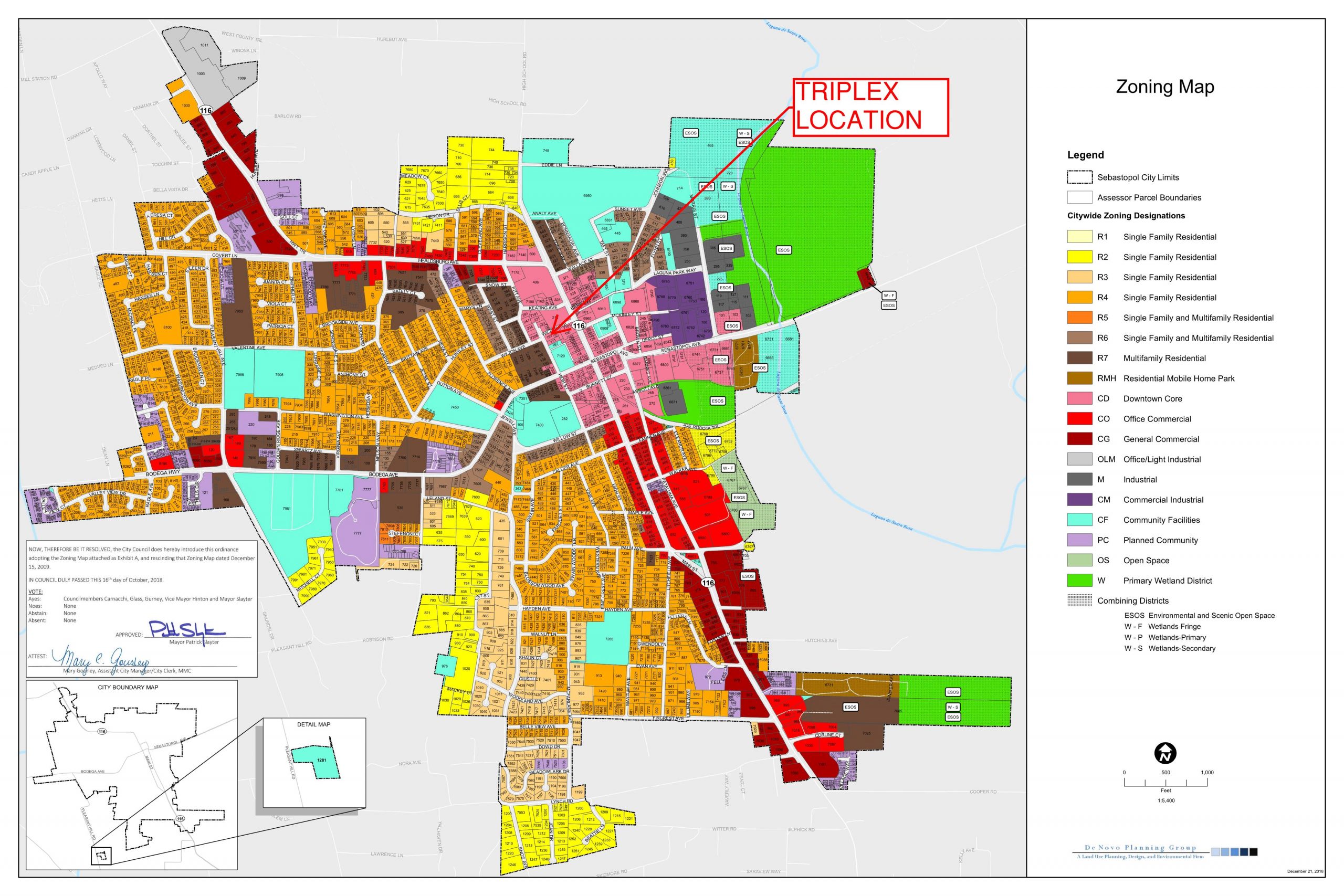 There are 3 zoning districts in Sebastopol that are exclusively single-family districts and they constitute 81% of the residentially-zoned land. The most widespread zoning district in Sebastopol is the R4 district. It encompasses 55% of the residentially zoned land and 28% of all the land (not including streets) in Sebastopol (the next highest is community facilities, which is parks and schools, at 13%) This building would prohibited in most of town. But here it is providing what I imagine are 3 relatively affordable housing units (I have to admit I don’t know how much they rent for). If we’re serious about providing more affordable housing in Sebastopol, we need to allow this type of building by-right, everywhere. 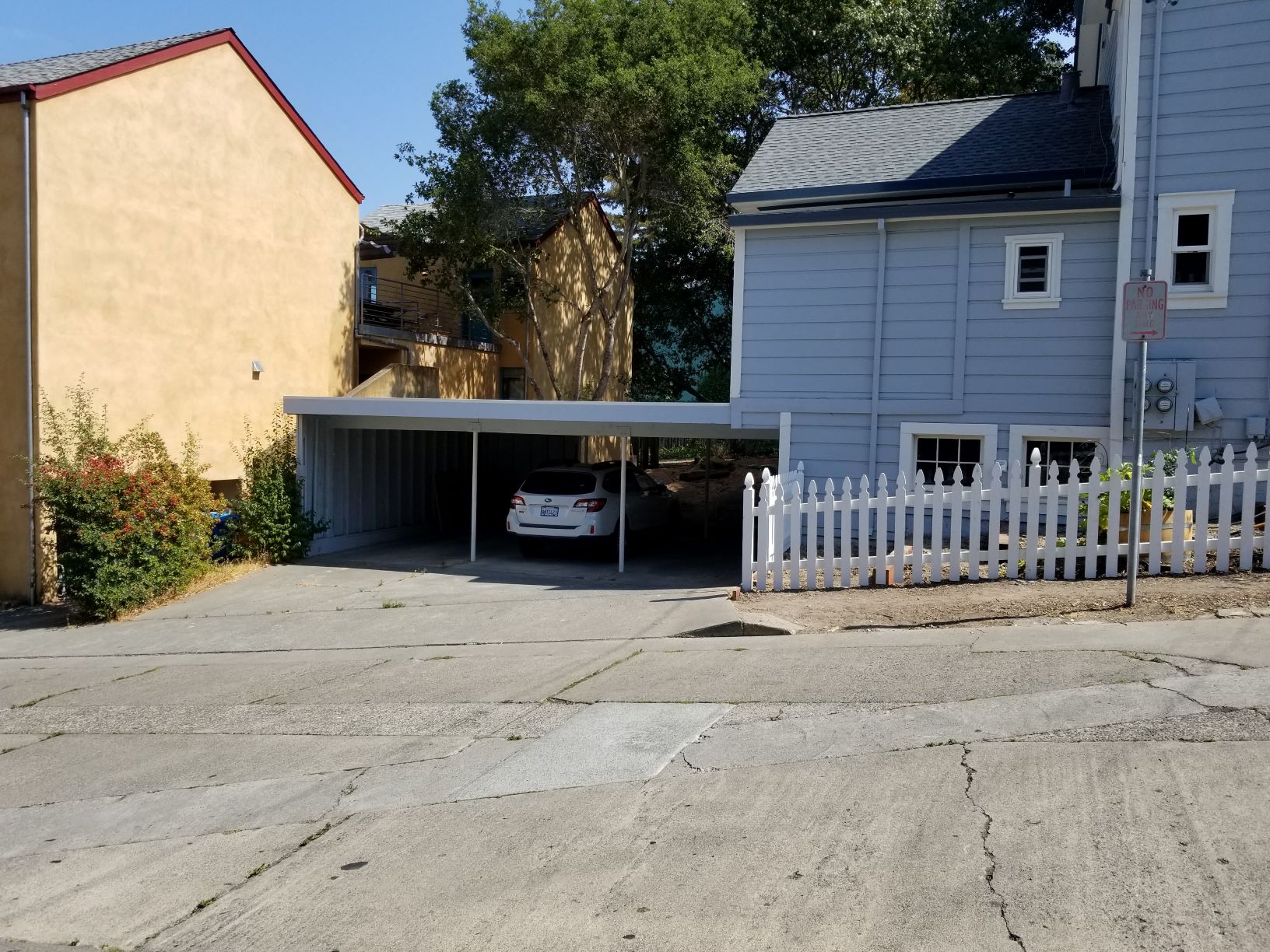 Another issue, of course, would be parking. This property does include 3 parking spaces, but depending on the zoning district, that may not be enough. Triplexes require 1.5 spaces per unit which would be 4.5 required spaces, but then the Downtown Core district allows you to reduce that by 30% which does take you back down to 3, so you would be allowed to provide 1 space per unit on this specific lot, if you were granted your Use Permit. If you were to build a triplex someplace else (on the 10% of the land that would allow it), you would need 1.5 spaces per unit.

Sebastopol is about to embark on an update to the Housing Element of our General Plan, which could include updates to the zoning code. With some tweaks to the zoning codes, there are many opportunities to provide more housing in Sebastopol that will complement our existing neighborhoods and as the current chair of the Planning Commission, I hope to make this happen. There is no reason that we should not allow this type of home to be built anywhere in our community.