I went to a conference recently and participated in a tour and session on ‘Missing Middle Housing.’ Missing Middle housing is a term coined by Dan Parolek of Opticos Design, Inc. Missing Middle refers to housing types between a single-family home and multi-family apartments that are compatible in scale to single-family residential neighborhoods. Some examples include duplexes, triplexes, courtyard apartments and bungalow courts. These were common housing types at one time and may still be found in older neighborhoods but they are generally not compliant with zoning codes developed post WWII and we subsequently do not see them built much anymore.

Missing Middle housing often result in housing densities in the range of 16-35 units/acre. But as was discussed at the conference only looking at density can be very misleading. Density is very abstract for most people and not a good way to evaluate whether a project ‘fits’ in a neighborhood or not. It really has much more to do with the scale and detailing of the building than with the resulting density.

I decided to investigate Missing Middle housing in Sebastopol with a couple of examples. 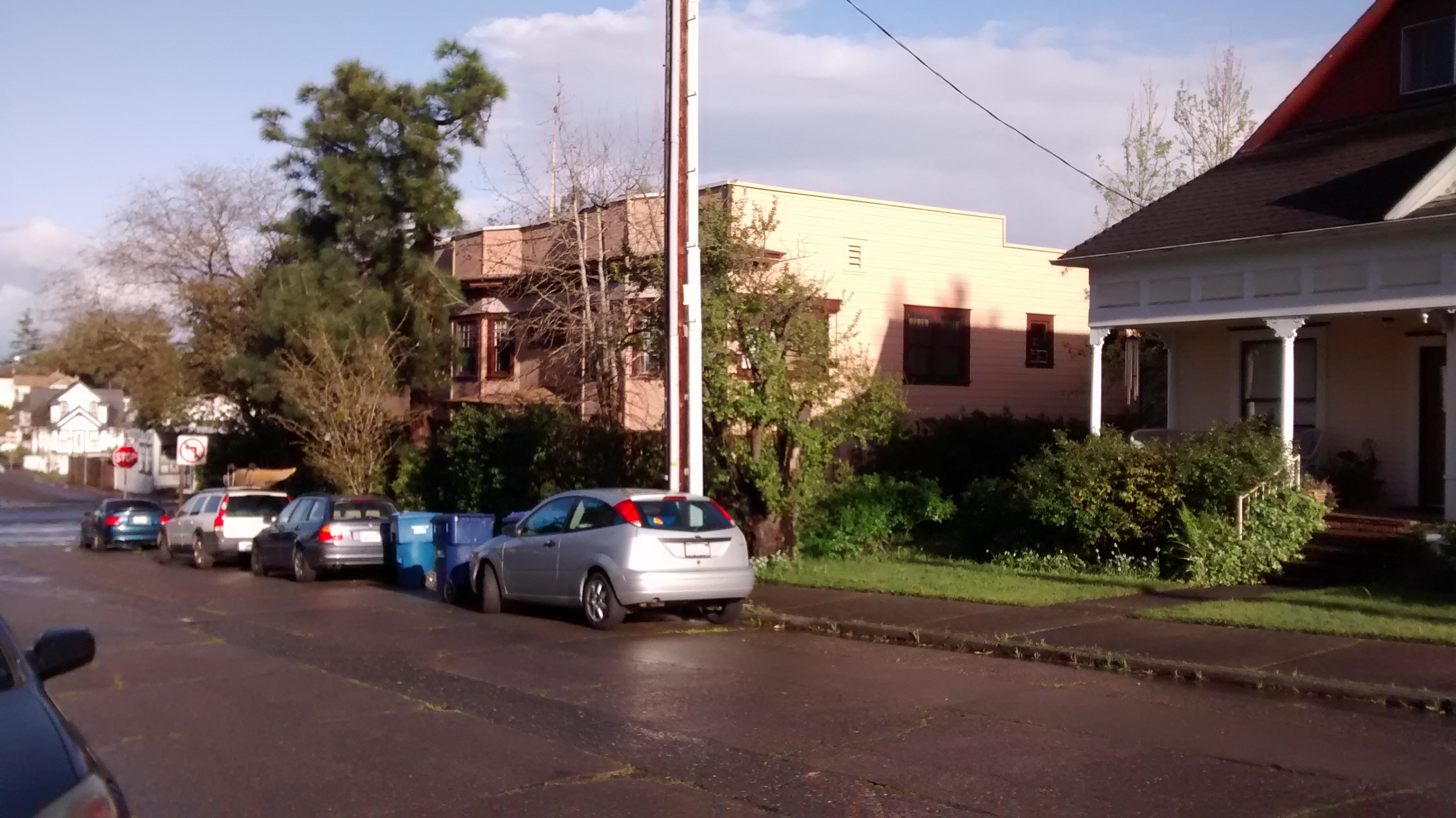 This is an apartment building on the corner of Main Street and Calder. Built in the early 20th century, it is just south of the downtown core where the street is populated mostly by  early 20th century single-family homes, some of which have been converted to commercial buildings. This building has 6 apartments. I believe they are a mix of 1 and 2 bedrooms and probably some of the more affordable rental units in town. I think if asked, most people would find the building is appropriately scaled and fits well in the neighborhood.

The lot size for this property is 9,846 sf or 0.23 acres. The resulting density is 26 units per acre. I think there might be 3 off-street parking spaces. 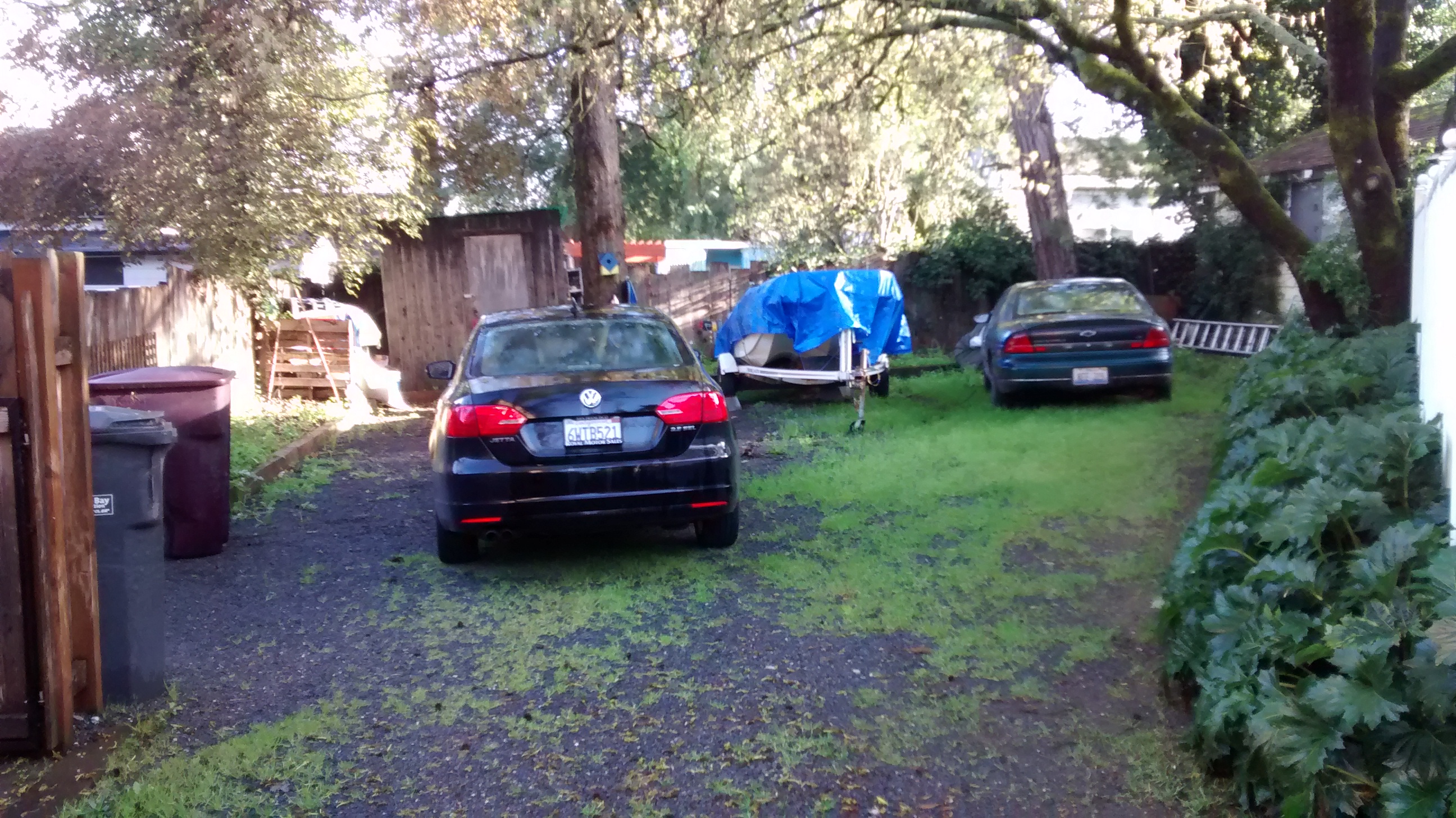 The on-site parking for a 6 unit apartment building. Not only is  this not enough parking under the current zoning code it also does not meet any modern standard for the design of a parking lot. No striped spaces, driveway access is not wide enough, no accessible parking space, etc.

This property is currently zoned Office Commercial. That zoning designation does allow for residential uses with a maximum of 1 unit per 2,900 sf of lot area. On this parcel that would allow 3 units. The parking requirement is 3 spaces for every 2 units if they are limited to 1-bedroom. A 2-bedroom unit would require 2 parking spaces on its own. So if you were to develop three 2-bedroom units you would be required to provide 6 parking spaces on the site. If you built three 1-bedroom units you could probably get away with 4 parking spaces. So today you could build half the number of units currently on the site, and need to double the amount of on-site parking. The current 6 unit building with 3 on-site spaces is an existing non-conforming use of the property.

I live around the corner from this building. 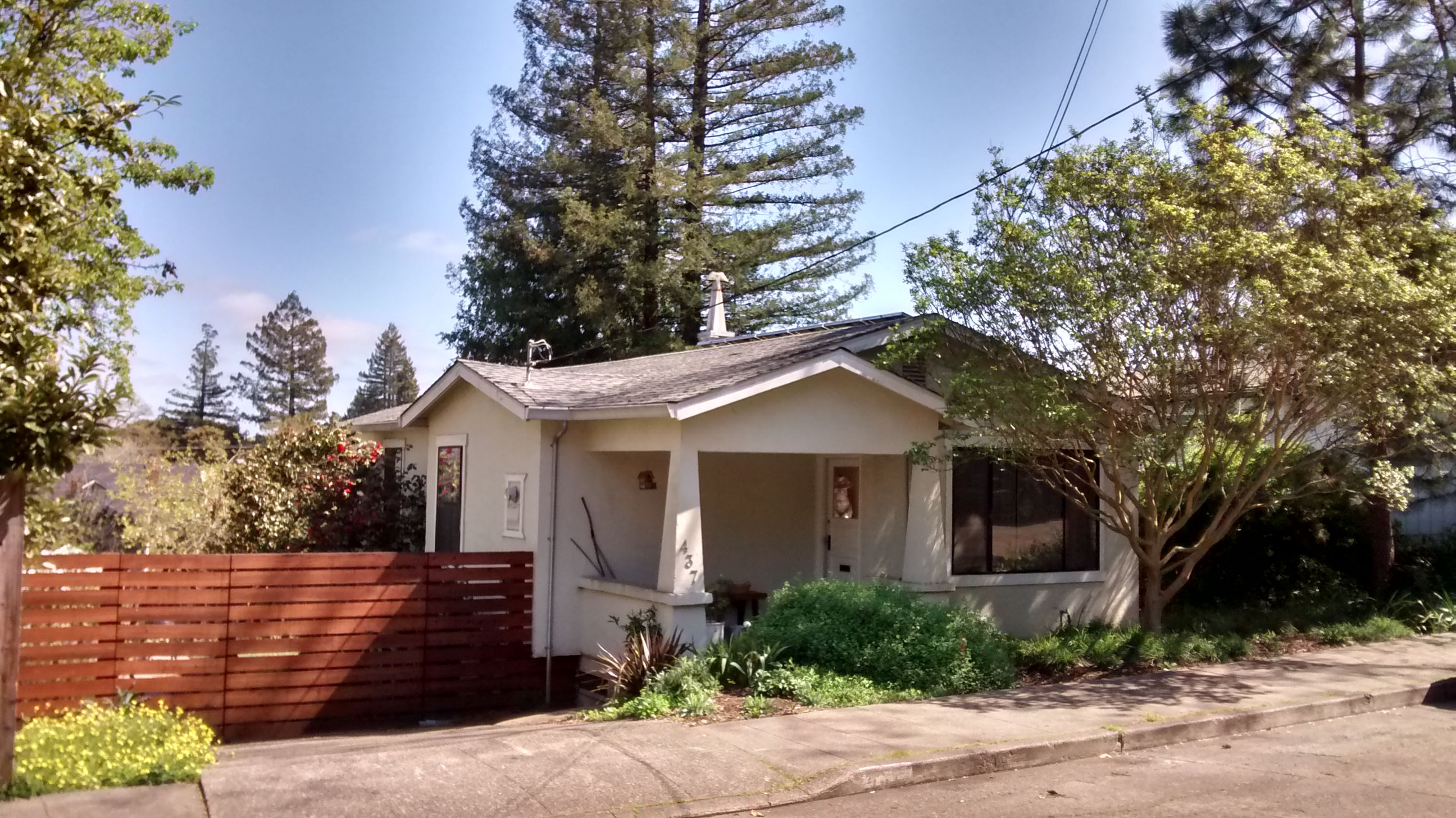 My house is modest bungalow built in 1922 with 2-bedrooms and 1 bath, a little over 1,000 sf. My lot is 3,750 sf (0.09 acres) which results in a density of 11 units/acre. (for readers not familiar with the measurement  of density you take the number of units and divide by the lot size in acres. It’s like determining how many units would be created if you built out an entire acre of land with my exact property).

My lot is zoned Residential Single Family 2. This is considered a medium density single-family home district. I’ve realized there are a lot of requirements in this zone that my house does not comply with. Minimum lot size is 6,000 sf in my zoning district which results in a density of 7 units per acre, hardly what I would consider medium density. My lot density of 11 units/acre is a bit more medium density in my mind. Minimum lot width is 60′ in this district; mine is 50′.

The front yard setback in this district is 20′. There is an exception that if the block is already developed, the front setback may be the average of the setback of the improved lots on the block. So my 12′ setback technically complies because all my neighbors have setbacks less than 20′. I’ll also note that the rear yard setback is 20′ (my house is about 16′ from the rear property line) so my 75′ deep lot would be limited to building in the center 35′ if I stuck to the current zoning requirements.

I started to wonder about the creation of a duplex on my property. Doubling the size of my house would still only be about 2,100 sf which is still below the average size of a single-family home built today. Adding an identical unit on the second floor is perfectly conceivable and would not look out of place in the neighborhood. 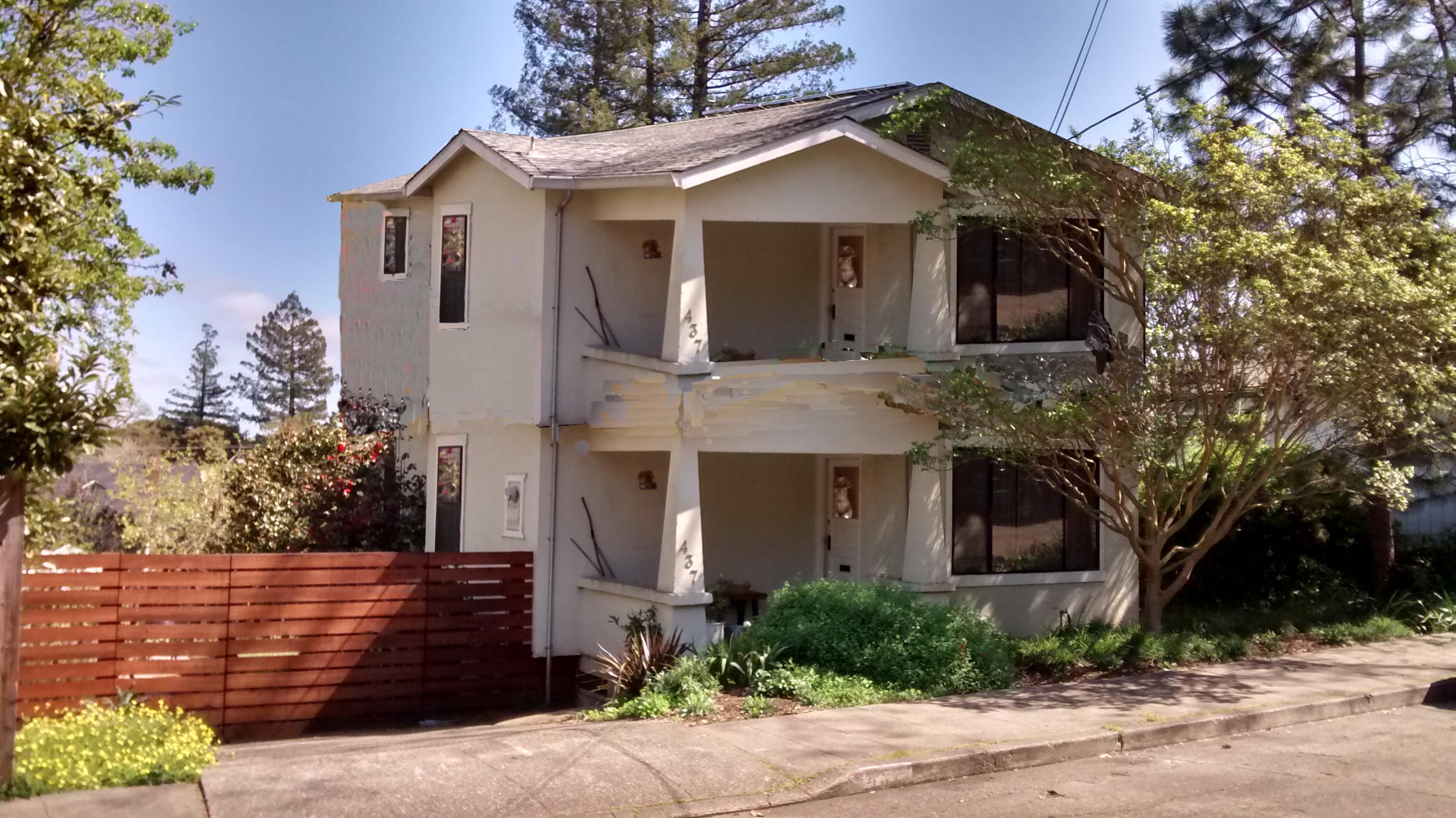 My house as a duplex – please excuse the crude photoshopping…

But it would not be allowed by current zoning which for one does not allow duplexes. Creating a duplex would increase the density to 22 units/acre. Far above the current allowed 7 units per acre.

With a duplex I would be required to provide 4 on-site parking spaces. I have a single-car width driveway along the side of my house (which I currently don’t park in because my car bottoms-out when I try to get into it). I don’t know if I would be allowed to provide all 4 spaces tandem style (one behind the other) but it’s the only way to fit 4 spaces on-site. Parking spaces are required to be 18′ long which would reach 72′ into my 75′ deep lot. Which is technically is achievable, although probably not desirable as it would consume nearly 20% of my lot area.

Through the General Plan update process currently underway, the medium density residential land use would be increased to 12 units/acre which would allow my current property to be in zoning compliance. But really, what harm would come of allowing two 1,000 sf units on my property? It would provide me with rental income, another family with an affordable apartment and increase the number of people that can walk to the amenities and services that downtown Sebastopol has to offer.

Sebastopol real estate is expensive and there is a lot of concern about creating more affordable housing. Updating our zoning code to allow more missing middle housing would go a long way to helping with the affordability problem. I’ll discuss some ways this can happen in a future post.