Santa Rosa: A City in Flux

Like many other cities in California, Santa Rosa is struggling with high housing costs and deteriorating infrastructure. Rents have risen 40% in the past 4 years. Median sale price has risen about 10% in the past year. Even with the economic recovery new home construction has been relatively slow. The cost of construction in Santa Rosa is similar here to the rest of the Bay Area. However, housing costs, while high, are generally higher elsewhere. So developers are developing where they get a larger return on their investment.

The City of Santa Rosa has $1 billion in projected infrastructure projects over the next 20 years. There has been limited discussion of where this money is going to come from short of changing the development fee structure which over the last 20 years has generated $230 million in revenue. Increasing development fees to offset this imbalance is not feasible and will only further discourage new housing development.

The City Council has been discussing these issues in recent months. In addition to considering changes to development impact fees the council has considered implementing rent control, which has been highly contentious. The city has commissioned a study to look at possible solutions to these issues which is due out this month. So far, no silver bullets have been found.

In addition to development impact fees the city also collects revenue through property and sales taxes. As readers of the Strong Towns blog know, development patterns have a significant impact on the amount of revenue generated through these two sources. To understand this dynamic further the city has contracted with Strong Towns and Urban 3 to undertake an analysis to look at the financial productivity of different development patterns across Santa Rosa with a focus on the differences between downtown and the surrounding neighborhoods. This study will help show city leaders the financial productivity of the areas of town developed in a more traditional manner of walkable mixed-use neighborhoods, to those that are more suburban in nature. 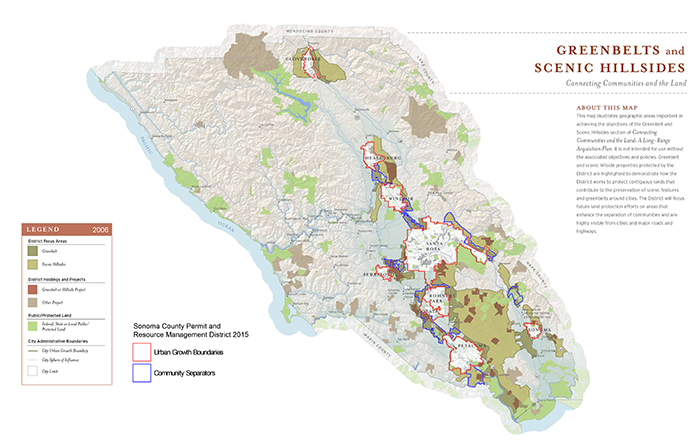 Sonoma County is also anticipating the beginning of service on a new passenger train by the end of 2016. The SMART train system runs along the highway 101 corridor of Sonoma County from Cloverdale in the north to Petaluma in the south and continuing on through Marin County to eventually connect to the ferry terminal in Larkspur for connection to San Francisco.

This is a $650 million infrastructure project whose success will depend on the development of the areas around each station. Santa Rosa has two stations: a station downtown in a neighborhood called Railroad Square and second station a few miles north of downtown. There is a large amount of vacant land in the station areas in Santa Rosa, and the rest of the county, waiting for appropriate development. This is a great opportunity to refocus development around the station areas into walkable, high-density, mixed-use neighborhoods. Proposed higher-density projects have been meeting resistance. However, the only way the train will be successful is if we develop the station areas appropriately. Low density, car-oriented development is not going to cut it. We need to get this right.

At a critical time when cities increasingly face the reality of unfunded infrastructure maintenance needs and of an acute shortage of affordable housing, we are confident that Urban3 and Strong Towns will provide very practical insights for addressing these concerns in a robust but fiscally stable manner.

At a critical time when cities increasingly face the reality of unfunded infrastructure maintenance needs and of an acute shortage of affordable housing, we are confident that Urban3 and Strong Towns will provide very practical insights for addressing these concerns in a robust but fiscally stable manner.  We hope that the events next week help start to change the conversation.  If you are interested in attending any of the sessions below please RSVP at our website.

The following evening  events will all be held at Bike Monkey, 121 Fifth Street, Santa Rosa

A look at the fiscal realities facing America’s cities. The way our cities have grown, and the way we have financed that growth, provides a short term illusion of wealth but leaves us with enormous long term obligations. A different approach can not only help us be more successful financially, it can actually improve our lives.

Measuring the City, a look at how the ways we choose to measure information reflects our reality. We don’t measure automobile fuel consumption in miles per tank, but that is exactly what we do with land when we set up our taxing and development policies. A miles per gallon analysis of fiscal performance reveals many insights on what makes a place truly productive.

Thursday: Transportation in the Next American City, a look at the assumptions behind the American transportation system and how they impact the costs, performance and experience of getting places. Driving to a place and driving through a place are different objectives, yet our designs barely distinguish between them. By relating our transportation designs to the way we want our places to perform, we find that we can spend less money and get much better results.

Urban Community Partnership will also be presenting their plans for next steps including bringing Joe and Chuck back to look at development opportunities in the SMART station areas.