One of the topics at our General Plan Advisory Committee (GPAC) meeting this week was ‘Community Character.’ It was an interesting conversation and it made me think about the form of the public spaces in Sebastopol and how they may be improved. People often describe Sebastopol as ‘quirky.’ I don’t know that that adjective is meant to describe the physical form of the community. There are a variety of building types and styles that I suppose could be described as quirky, but so do many other places. I think when people describe Sebastopol as quirky, it has more to do with the characters in our community than the character seen in the physical make-up of the town itself.

The physical character of Sebastopol is largely defined by the state highways that bisect the town. As in most of America the car has come to dominate the public realm. In the 50’s 60’s, and continuing into the 70’s, 80’s and 90’s commercial development began it’s sprawl toward the edges of town. In the 80’s the north-south state highway was converted into a pair of one-way streets through downtown. This has done much to define the character of downtown, and not in a good way.

All of the primary gateways to town are lined with auto-oriented sprawl. 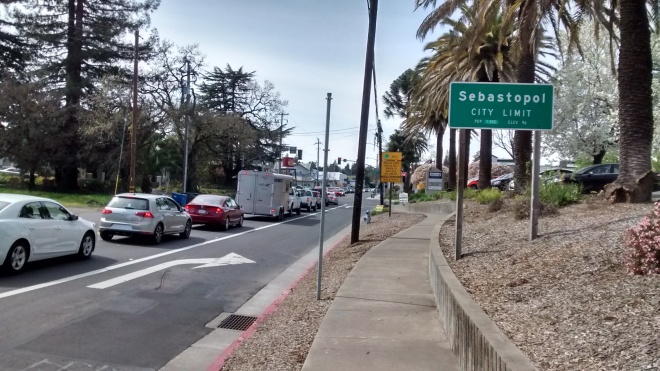 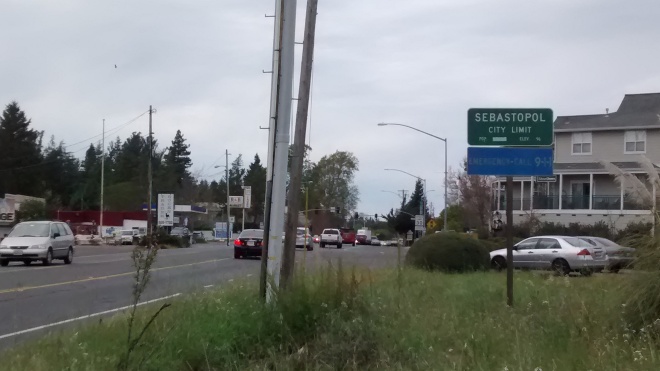 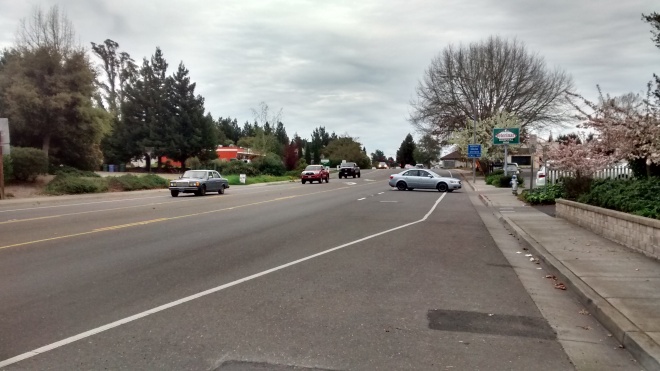 No sign – but this is the north edge of town. 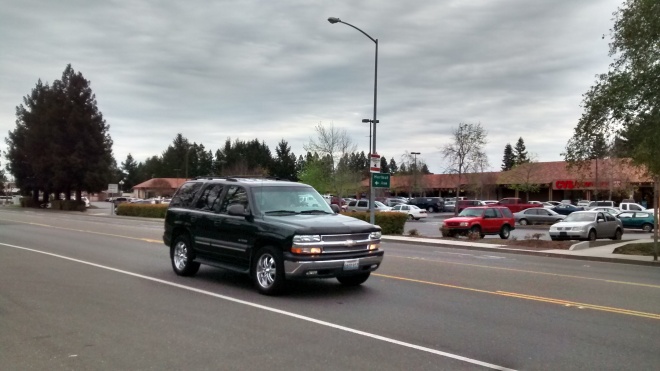 This strip mall is near the northern edge of town on Gravenstein Hwy North.

There has been a focus in the last 20 years on improving the downtown character in Sebastopol. A new town plaza has been created on the site of a former parking lot, utility lines have been relocated underground, some streetscape improvements have been undertaken and the city has offered facade improvement grants to downtown businesses which has resulted in some much-needed makeovers. A couple of new buildings and remodels have improved the character of downtown, most significantly in The Barlow. 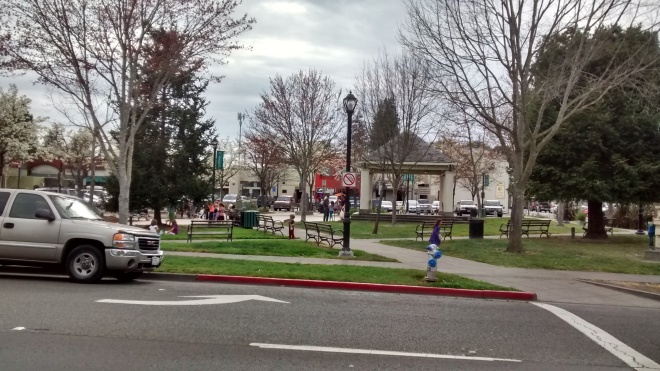 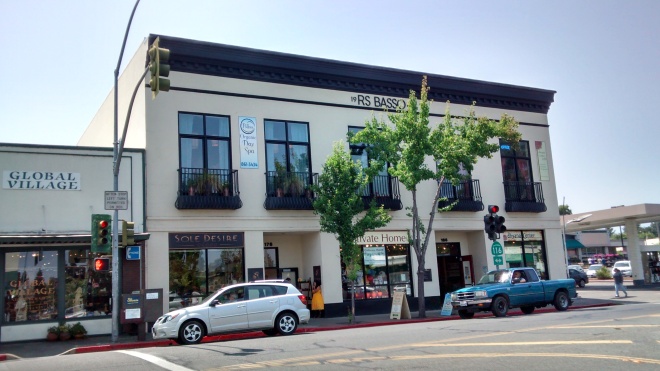 The Basso Building on Main Street 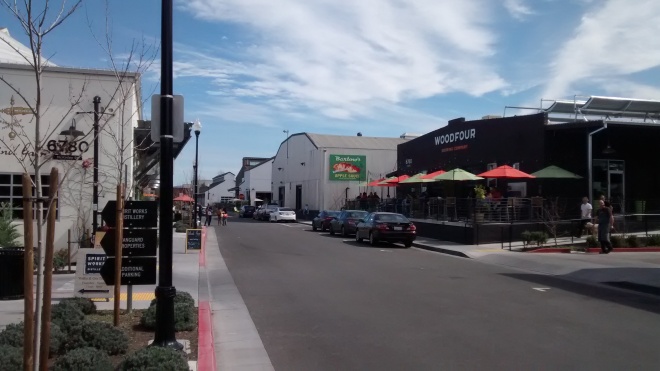 McKinley Street in The Barlow

A lot more work needs to be done at the gateway entrances to town, particularly from the north and south. While these areas are car-oriented in their physical form, they are close to residential neighborhoods and have many resident-serving businesses. During our conversation at the GPAC meeting this week I realized that most, if not all, residents of Sebastopol are within walking distance of a major grocery store. The south end of town has Fircrest; center of town has Whole Foods, Community Market and Safeway; and the north end of town has Pacific Market and Lucky. I think that’s remarkable given a population around 7,400! 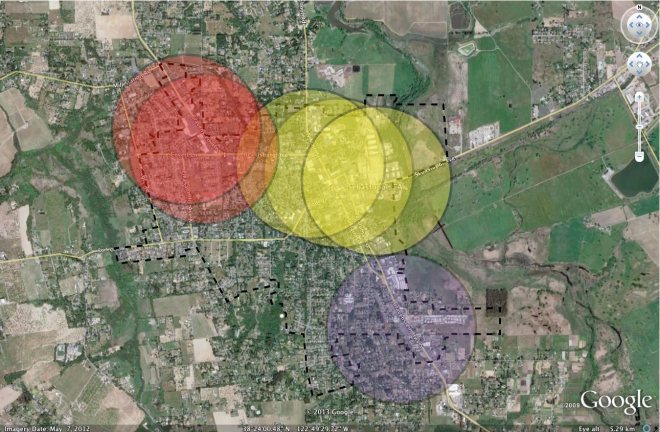 Circles represent 1/2 mile radius from the 6 grocery stores in town. Pretty much everyone in town is within walking distance of a grocery store, except maybe the SW corner.

Sidewalks would be a good start. The sidewalks on the east side of Gravenstein Highway South are spotty. You have to walk on the shoulder of the road in some locations. I’m a dedicated walker so I’ll do it. But I’m sure it discourages many people. The city needs to prioritize connecting the sidewalks to support these businesses.The east side of Gravenstein Highway North also has stretches of missing sidewalks. 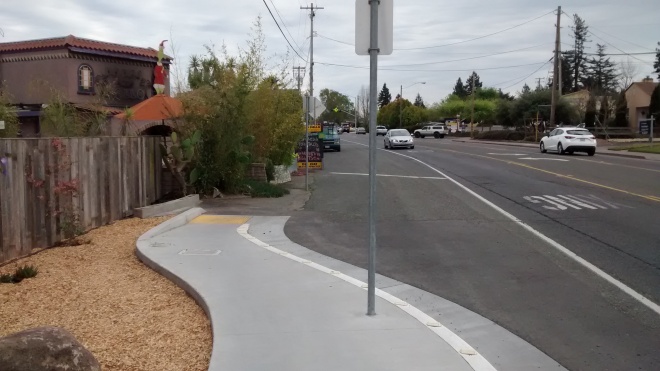 One of the stretches of ‘missing’ sidewalk on Gravenstein Hwy South 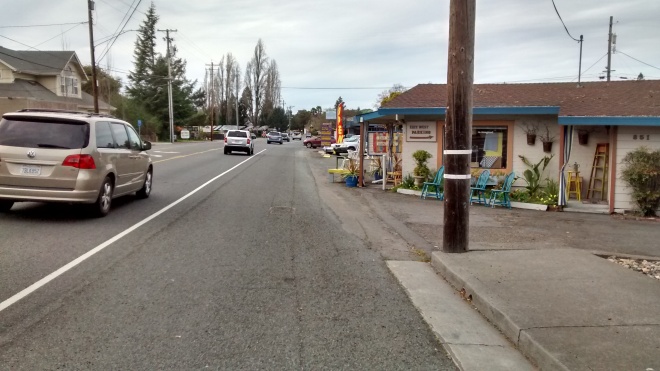 Another section of ‘missing’ sidewalk on Gravenstein Hwy South

There is a sidewalk here, but would you want to walk on it? 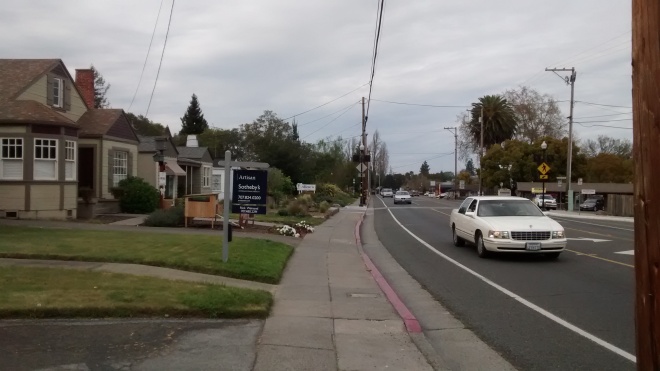 Sidewalk on west side of Gravenstein Hwy South. 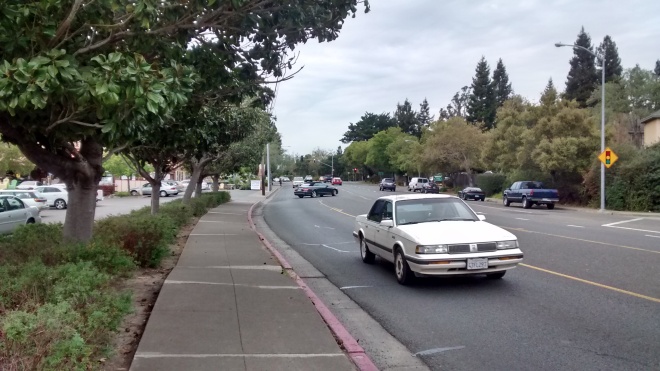 Gravenstein Hwy North, the trees help, but it’s still not a great place to walk.

While the west side has a sidewalk it’s not a great walking experience at either the north or south ends of town. The sidewalk is adjacent to the curb and there is no parallel parking so traffic whizzes by at 35 mph or faster. You feel out of place as a pedestrian. The road is a reasonable 3 lanes (1 northbound, 1 southbound and a center turn lane) except a couple of stretches at Gravenstein Highway North, but you feel like you are walking along a highway. A similar experience may be found at the north end of town. Although a large extent of the frontage of the west side of the road is taken up by strip commercial shopping centers which makes it even less pedestrian friendly since the frontage is all parking. 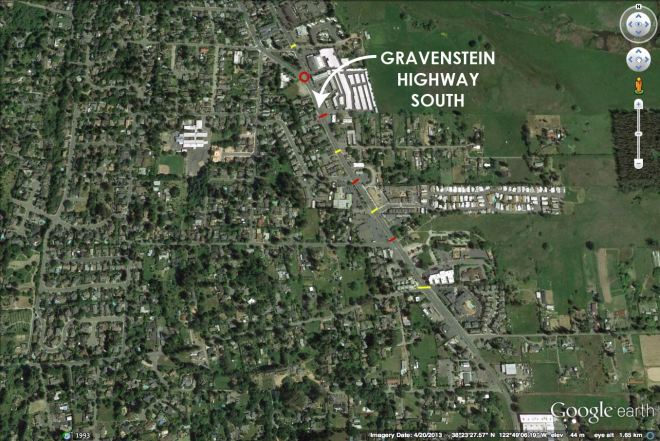 There is a street intersection about halfway between them which would be a great opportunity for another crosswalk. The next crosswalk to the south is about 760′ and is at a traffic light. Again, there is an intersecting street about halfway between, another opportunity for a crosswalk and a more reasonable distance between crossings. The next crossing to the north is about 1,200 feet. There is an opportunity for a crossing about 400′ north, but then it’s tricky due to the geometry of the streets where they turn into the one-way streets. If/when the streets are converted back to 2-way, this would be a great location for a roundabout. A roundabout would also make it easier for a pedestrian crossing at this location. 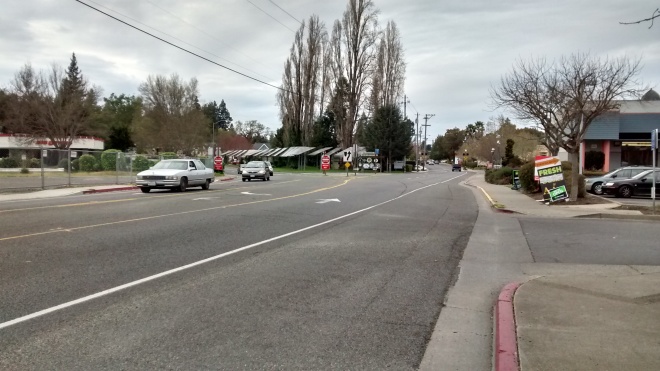 Good place for a roundabout

North of downtown, Healdsburg Ave. has several ‘Street Smart Sebastopol’ crossings, but from the crossing at Murphy Street, the next crossing to the north is about 2,300′. There could be a crosswalk at Lyding lane, 300′ from Murhpy, but then you get to the awkward intersection of Covert and Healdsburg Ave. A roundabout has been mentioned in the past for this intersection as well which could accommodate a better pedestrian crossing. 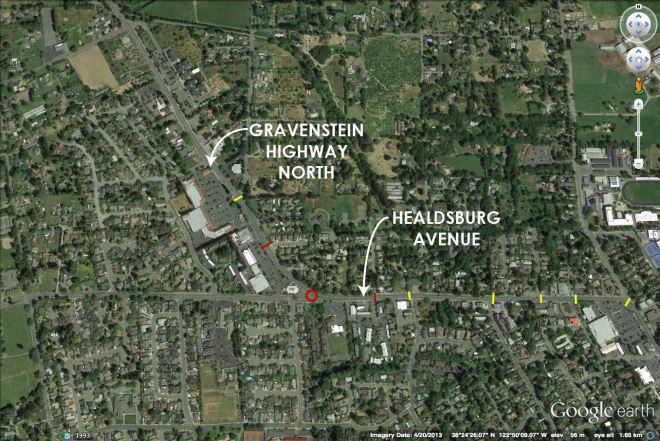 Parallel parking would make it more comfortable to be a pedestrian. You feel a measure of protection from moving traffic when you have cars parked between you and the travel lane. And parallel parking does serve to slow traffic as you have to be more alert to cars’ parking maneuvers. New developments on North and South Gravenstein Highway have been required to install parallel parking. I don’t know if the width of the right-of-way is enough to accommodate parking lanes on both sides at all locations, but where possible it would help. 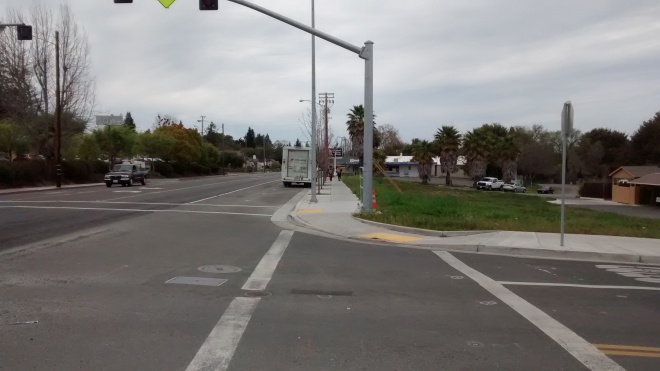 This is the site of a proposed mixed-use project. The adjacent residential development was required to improve the frontage with a sidewalk, street trees, parallel parking and even enough room for a bike lane. The proposed project is 2-stories and will be located at the back of sidewalk.

Street trees would also improve the pedestrian experience. Many of the existing curb-adjacent sidewalk on the west side are probably too narrow to allow for street trees in the sidewalk. But maybe the private property owners could be encouraged to plant trees behind the sidewalk. Maybe the city could donate the trees, or provide them at cost to interested residents/businesses. New developments have been including street trees in addition to the parallel parking and should be required to do so in any future development/redevelopment. 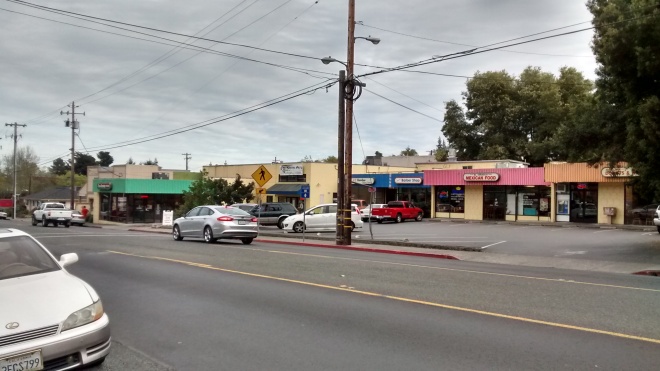 Strip shopping center on Healdsburg Ave. Not a positive contribution to the community character. 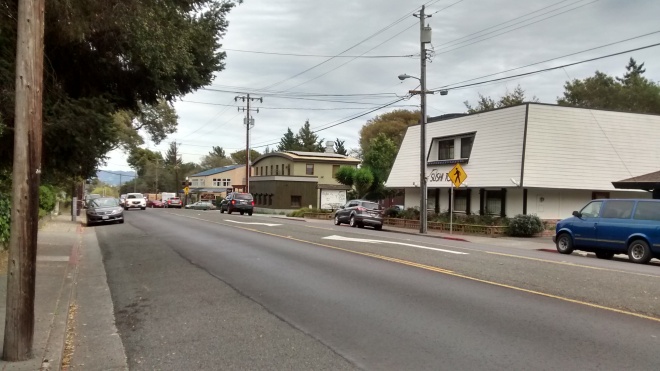 A couple new projects and a renovation are creating a better restaurant/commercial hub on Healdsburg Ave. about a block away from the strip development above. 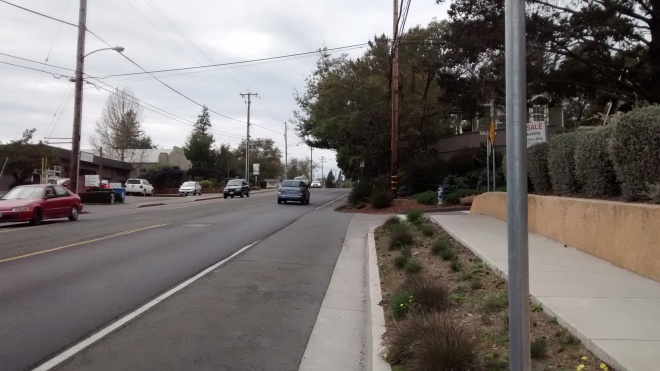 Healdsburg Ave, where the sidewalk ends. 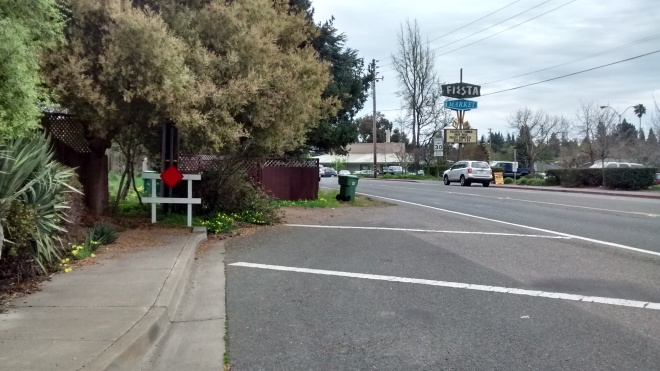 Gravenstein Hwy North, where the sidewalk ends on the east side.

Even with the crosswalks, you still have a problem with traffic speed. South Main Street and Healdsburg Ave. have several of the ‘Street Smart Sebastopol’ pedestrian crossings, but traffic tends to travel faster than the posted speed limit along both stretches. These crosswalks do not eliminate all conflicts between pedestrians and cars (several pedestrians have been hit in these crosswalks, one man unfortunately died last year after being hit in a crosswalk across Healdsburg Ave.) but they generally make drivers more aware of pedestrians than if there were not crosswalks. In a previous post I discussed the concept of raised intersections which would serve to slow traffic. Another option would be to install stop signs. Traffic from side streets does probably not meet whatever Caltrans’ standard would be for the installation of stop signs, but installing stop signs at every block or 2 would definitely slow things down. And it certainly is not without precedent to have a stop sign at every intersection in an urban area. Drivers may not like to have to stop so often, or have to slow over a raised intersection, but who cares. We need to decide if our public right-of-way is to be designed to benefit people or cars. This is a key decision that will effect the overall character of the community. So far we have been prioritizing the car at the expense of our community’s physical character. I argue that to improve our character we should favor the pedestrian at the expense of the car. The added benefit is that when people feel more comfortable walking, they will, which will in turn reduce traffic. 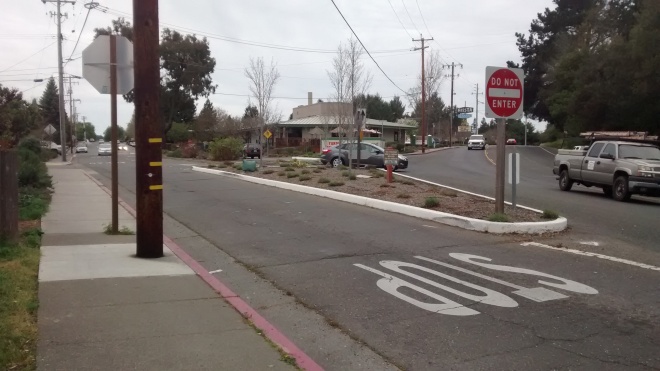 Not an easy crossing for pedestrians. Another possible roundabout location?

As I’ve been writing this I’ve realized a very easy low-cost first step would be to rename the north and south stretches of 116 as they enter town. At the south end of the we have Gravenstein HIGHWAY South and at the north end of town we have Gravenstein HIGHWAY North (The gravenstein is a type of apple that is produced locally, although there are not as many apple orchards as there once were. Trader Joe’s does sell gravenstein apple sauce). Maybe we could start by renaming both roads to eliminate the word HIGHWAY. This may start the transformation of how we view these roads and their function differently in our community. It’s sometimes amazing how the smallest gestures can trigger a tidal wave of change. Maybe we start with changing the names to Gravenstein Avenue North and Gravenstein Avenue South. I feel better about them already.

Much has been written about the housing affordability…

I participated in the Sebastopol City Council Housing…
© 2020 Fritz Architecture. All rights reserved.