After Hours Vitality and a Movie Theater

I was asked recently to suggest ways to provide vitality in a small town downtown in the evening, after the shops close. It’s a great question and one in which many small towns struggle with. People are out and about downtown during the day and on weekends in particular, but after the shops close at 6:00 things get pretty quiet. Most of the businesses in downtown Sebastopol are retail in nature. We have a decent number and variety of restaurants downtown, particularly for a town its size. But these alone are not enough to create a vibrant downtown scene in the evening. A downtown needs entertainment and social venues to keep it active. It also benefits greatly from people living nearby.

I think one place that helps keep Sebastopol even a little vibrant in the evenings is the movie theater. The movie theater is located in a building that was formerly a distillery (I don’t know when the conversion was made, but it’s probably been at least 20 years). It’s a great re-use of an existing building located in the heart of downtown Sebastopol. It currently operates as the Rialto Cinema which relocated from Santa Rosa about 3 years ago. It shows a combination of independent, foreign, documentary and mainstream films. They also broadcast Metropolitan Opera and London’s National Theatre Live events and screen other special events including a live screening party for the Oscars and the Sebastopol Documentary Film Festival. It’s a great resource for a small community and a great fit for Sebastopol.

The problem with the theater is the way the physical building fits into the community. I realize they were working with an existing building, and maybe I don’t understand all of the limitations. But physically, it turns it’s back to the town. The aerial photo shows the location of the theater in relation to downtown. 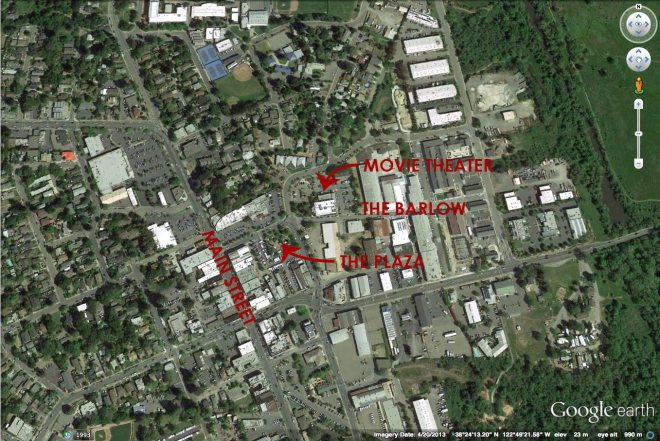 As you can see, it is kitty-corner from the town plaza. Almost all of the residential neighborhoods in Sebastopol are located to the west (left) in the aerial photo. So people approaching the theater will be coming from the direction of the plaza. 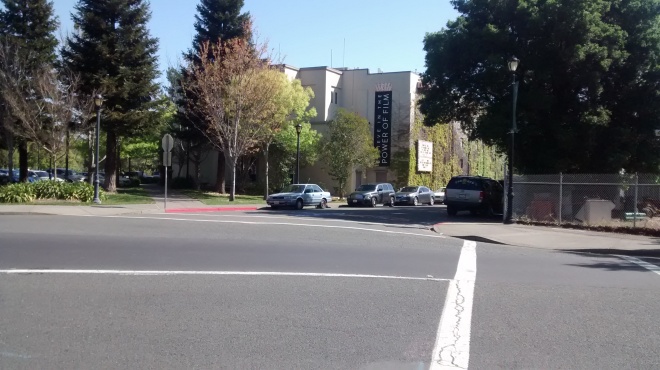 View of Rialto Cinema from the plaza. The logo at the top of the sign announces ‘Rialto Cinema’ but that’s all that identifies this building as a movie theater.

The small park on the corner, which is city-owned property, has a sidewalk that connects visually with the plaza, if you know what you are looking for.

Sidewalk that points to the plaza behind me across the street.

And it does lead you to the lobby. But the actual entry to the theater is on the opposite side of the building, facing the parking lot. 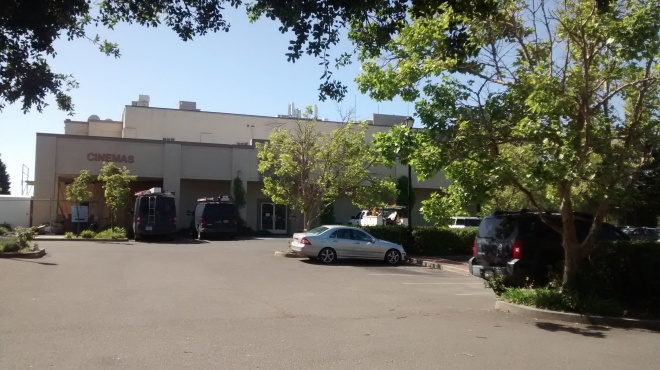 Entry to lobby, across the parking lot.

Once again, we expect, encourage, and reward people who drive while making pedestrians search for the entry to the building.

The theater lobby is currently being remodeled, but the entry will still not at all be obvious on approach to the building. To be honest, I lived in Sebastopol at least 3, and maybe as long as 6 months, before I even knew where the movie theater was. I would hear people talk about the movie theater but for the life of me couldn’t figure out where it was. Look at the location of, I guess you would call it a marquee? You really cannot see it unless you are across the street from it. This is not a location many people would find themselves. 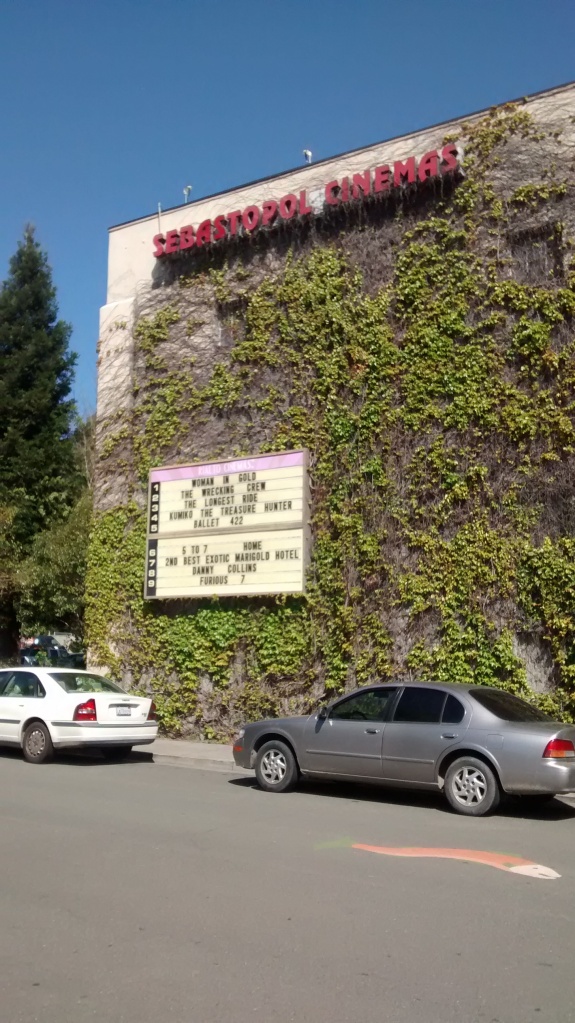 Cannot see this ‘marquee’ from just about anywhere.

An entrance on the west side would make this building feel much more a part of the community. People leaving the theater after a film would be directed toward Main Street to maybe grab a bite to eat or have a drink. As it is now, you are sent back to your car and on your way back home. Or if you go out to dinner after, you are encouraged to get in your car and drive. Doesn’t bode well to encourage you to park once and walk when downtown.

The theater also now serves as a critical link between The Barlow and Main Street. On that score it is particularly not successful. This is the frontage on McKinley Street which leads to The Barlow behind me.

While The Barlow and Main Street are about a 3 minute walk apart, this wall and the largely vacant site across the street make it feel much farther. To be fair, this is a new arrangement. When the building was converted to a theater, the area which is now known as The Barlow was warehouses and light industry and there was no reason to walk down McKinley Street which was a dead end. But thinking of how this frontage could be at least a bit more interesting is crucial to linking Main Street and The Barlow, along with the redevelopment of the property on the opposite side of the street, which doesn’t even have a sidewalk.

It would also be great if the theater could do something to announce it’s presence. I realize it’s too late to relocate the lobby to the west end of the building. But new signage, including a real marquee that reaches toward the plaza, would be great to let people who are just visiting, or even new arrivals to Sebastopol, that we have a great movie theater in town. I don’t know that it would increase the vitality of downtown, but it certainly wouldn’t hurt.